Last weekend Spring made a fleeting visit. It was 20’C, blue skies and a warm wind blowing from the south; perfect for bike rides, BBQs and playing sport. Except there was something else in the air…

On Saturday I did something I’ve spent the last three months dreaming of; de-insulating my apartment. Still in my pyjamas, I ripped all the bubble wrap and heat insulating sheets from off my windows, letting light and fresh air flood into my apartment. After breakfast, I continued my spring cleaning frenzy. Blankets washed, dust swept away and heaters piled into cupboards. Nothing has ever felt so satisfying. Good riddance winter! 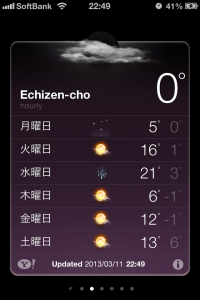 However, the weather changed drastically on Monday and the temperatures plummeted again, to 0′ at night that pretty much means 0′ in my apartment. I reluctantly brought out the thick blankets again and snarled at the weather gods for teasing me. If the weather gods’ are fighting over whether it’s time for spring or not, the Winter god is winning.

There is also another power in the skies, China. More specifically, it’s sandstorms and dirty pollution. When I tore down the bubble wrap I found my windows were filthy with an orange dust. My car windscreen also was covered with a thick film of something suspicious. Word-of-mouth quickly spread that pollution from mainland Asia, i.e. China, had blanketed many parts of Japan with a yellow haze of smog. So that’s what was on my window!

Japanese people have an acute awareness of how clean the air is, outside and inside. They open all the windows of the school to let in fresh air during cleaning time. They have machines which give an index of how clean the air is, and often rinse out their mouths before eating. Like it’s common to in China, Japanese people wear white surgical masks when there is a high pollution risk outside. Ironically, kerosene heaters are still the most common type of heater even though they give off potentially toxic fumes!

They are right to be so concerned about what they’re breathing in, because at this time of year high amounts of microscopic particles of toxic waste are in the air, called PM2.5. It’s particle matter, smaller than 2.5 thousandths of a millimetre, that can be inhaled into the respiratory system. These particles are mostly generated by the burning of fossil fuels and vehicle emissions. When inhaled they can cause inflammatory responses, the thickening of artery walls and cause other unpleasant effects. So, not something you want to breathe in.

China is a ”pollution superpower” says a Japanese newspaper. Having spent seven weeks in China in 2008, I know how filthy the air in Chinese cities is. In Beijing I couldn’t see more than a kilometre because of the pollution, and many people were wearing masks to prevent inhaling it. What I didn’t know is how harmful it is.

China is thought to only properly process half of it’s 300 million tons of industrial waste a year, so the rest is presumably burn quickly and cheaply, giving off dangerous pollutants. As well as suffering from its own air quality, these pollutants are very easily blown to the rest of Asia. Obviously this does not help ease the already heightened tension between Japan and China.

The results in Japan are that many people have taken to wearing masks outside, especially in cities in Kyushu, such as Fukuoka, where I’ll be visiting in just two weeks time! In Fukui, people have stopped airing their futons and clothes outside and my town seems like a ghost town on very hazy days. Families are just waiting inside for the smog to blow over so as to enjoy the expectant hanami ‘flower viewing’ season. 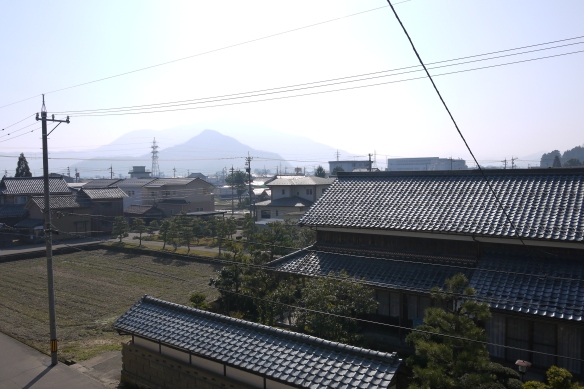 Mount Hino is obscured by the sunny, polluted and pollinated haze

Yet, if that wasn’t enough to deal with there is something else in the air.

Kafunsho ‘pollen illness’ is raging the country, another annual season which you don’t know about until you see people wearing masks, patches over swollen eyes and streaming noses. And it’s not just a few people either. It’s estimated about 33% of the 120 million population are suffering from hay fever in Japan!

Now the temperatures are above 10’C, Cryptomeria trees and Japanese cypress trees, which were planted in large reforestation programs after WWII, are scattering their pollen across the country. Since the trees were planted, the problem has got worse and worse. An unanticipated effect of the reforestation scheme was that the older the trees, the more pollen they produce. So now, they are producing about six times the amount they were in the 1960s when this first became a problem.

So I have decided to spend my day off inside, I’ll dry my washing inside and take a scarf if I go out. I don’t fancy a cocktail of PM2.5 and pollen in my lungs. Yet at least it’s warm enough not to have the kerosene heater on, and I can see a pink splash of colour in my neighbours’ garden, it’s an early blossoming sakura tree. A glimpse of what’s to come. 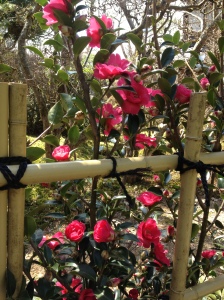 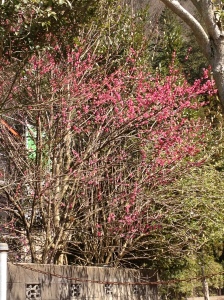 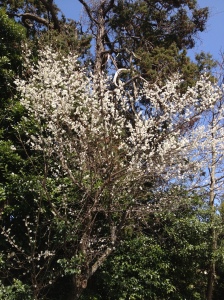 and white plum blossom too!

When I wake up to the sound of silence, I know it has snowed. The white shines through and around my curtains, until I throw them upon and see the landscape changed into a snowy paradise. Over a steaming cup of tea I contemplate how to spend the day. It’s only February but the season for Echizen daffodils is nearly over. The narcissus is a winter-flowering plant that somehow thrives on the windy western coast of Japan in January and February. Thinking that the coast couldn’t be as snowy as outside my window, I decide to head to the sea. 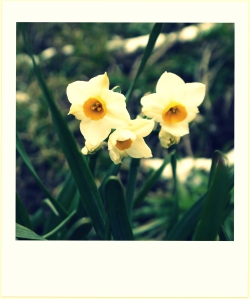 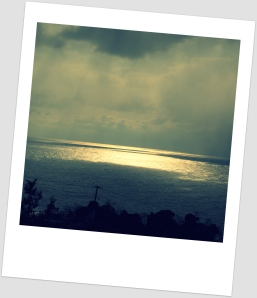 With Zoya and Julia as passengers, I drive carefully down the winding roads to the coast. We get out of the car at Cape Echizen Daffodil Land and it is still snowing. Soft fluffy snowflakes settle for a mini-second, then shrivel on the salty surface they’ve landed on. We watch as snow drifts race towards us across the sea, whilst the sun pitifully tries to melt them away. 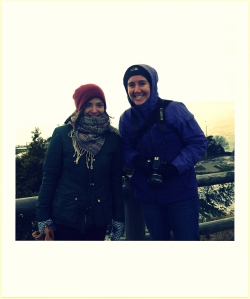 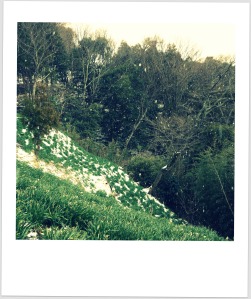 There is a not ‘A host, of golden daffodils’ as Wordsworth described in the English Lakes, but instead a spotting of the rare yellow flower, the winter narcissus. We laugh at another overrated tourist attraction in Fukui! Yet ‘Daffodil Land’ has a strange charm to it, with its white lighthouse and lullaby music being played to the struggling daffodils. 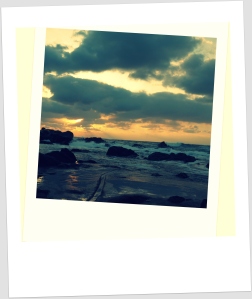 As we drive further up the coast we see wild and cultivated daffodils blowing in the breeze, far more than at the designated spot for seeing them. Our destination is a much-anticipated cafe that is famous for clam chowder, authentic chocolate cake and ocean views. We weren’t disappointed. 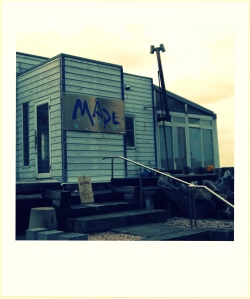 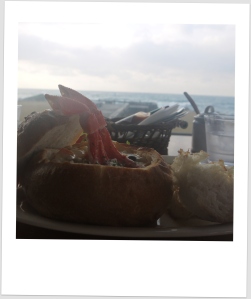 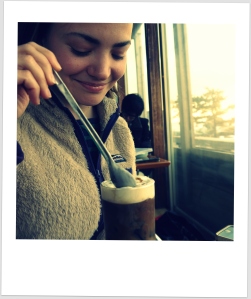 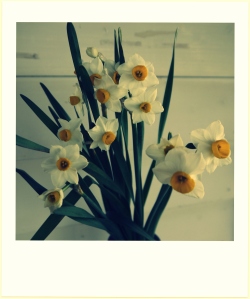 After warming-up inside, we went for a walk on the beach. As well as beautiful rocks, pebbles and driftwood there were lines of colourful plastic containers, old rope and the odd shoe that had been washed up on the beach.Some say the rubbish makes the beach look untidy but I like wondering the story behind each sea stolen item. 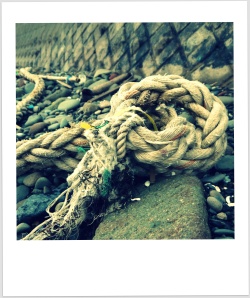 It wasn’t a particularly spectacular sunset but we were all happy to be next to the ocean and reminisced about beach combing in our own countries. 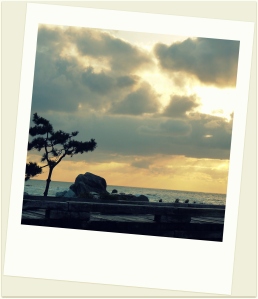 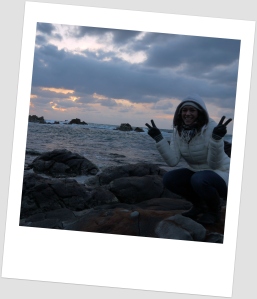 For 100 yen we each bought a bunch of sweet-smelling daffodils which are a subtle reminder that spring is on its way, even if it is still snowing outside.